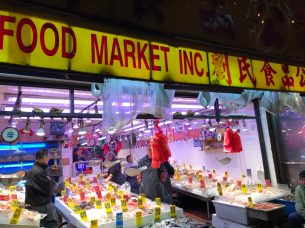 When I tell people I am a Fisheries Biologist, they typically picture me working offshore counting and measuring fishes on a trawler, or perhaps, waste deep in a cold mountain stream tagging trout. However, nothing could be further from the truth. I am more likely to be found New York City’s Chinatown or at an Atlantic port city. My beat is the fish, or more specifically, the seafood we humans consume as foods and medicines.

Not too many years ago a walk along Grand Street would take me past dozens of shark fins proudly displayed in windows. Some of huge sizes and fetching prices in the thousands of dollars. Small Sea Moths fish are found Traditional Chinese Medical shops and the fish markets are filled with dozens of species, many unknown to Western consumers.

I think it is important to define seafood. Seafood is not just fish and it is not just from the sea. Yes, in includes fishes, but also Crustaceans, Mollusks, Echinoderms, and in some parts of the world Marine Mammals. Walking Mott street you can see shoppers picking out frogs, squeezing them as if checking bread for freshness. Turtles are often tied with a convenient rope handle so shoppers can carry them home. So, all aquatic life that is consumed as food falls under our definition of seafood. Freshwater species are included along with marine in this blanket definition. It is this entire seafood market that is of interest to the fisheries biologist.

It is here deep in Manhattan that my interest in shark conservation was peaked and honed. When I graduated from college with my Biology degree, I went on to fisheries observer training, then to training as a fish inspector. As I would pass the shark fins, I wondered why they would gain such high prices. I found out they were used in a tasteless soup used to enhance male virility. I wondered if it was possible to find what species of fins I was looking at, but the way they were prepared made this all but impossible.

To this day you can still find the occasional shark fin, and if you know where to ask be served a bowl of shark fin soup. But conservation has put a dent in the public sale of shark fin products and driven in underground.

Today I explore fish markets up and down the Atlantic Coast to get an idea of the variety of fishes, shellfishes, and other seafood being offered for sale and consumed.

Robert J. Heyer is a Biologist and Marine Science Educator from New Jersey. He is a member of the National Marine Educators Association, Association for Professional Observers, and a Fellow of the Linnean Society of London.