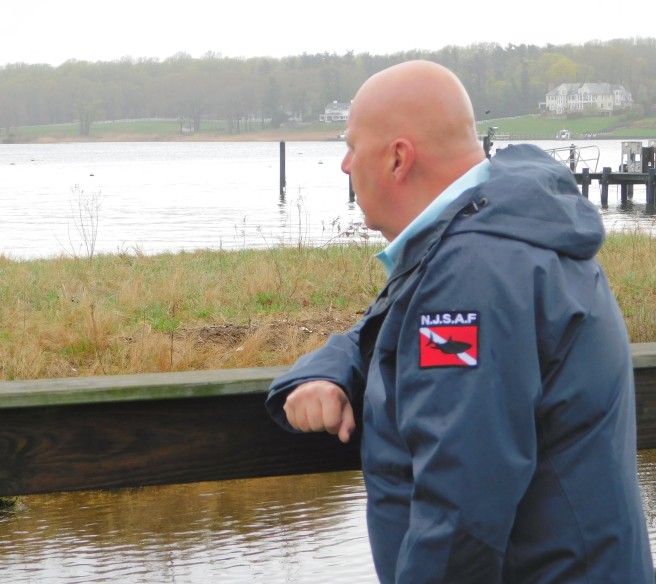 During the last weeks of August there would be three attacks all within a mile of each other.

The first attack took place on John Parker and Edward Matthews as they were clamming in the Shrewsbury River just off of Parkertown (Highlands).The two men were commercial clam harvesters and well experienced in the waters.

The area was just North of the Twin Lights Lighthouse near the current location of Bahr’s Landing.It had been a hot summer with abundant fishing catches.

Swimming was popular at the time and the beaches were full of bathers and swimmers. There had been several drownings that summer at various locations.
The men were standing chest deep in water raking for clams when they noticed three large sharks headed straight for them.

In a panic they hurried to their boat and climbed on-board.
The sharks came straight for them and started to ram the boat. The attack intensified as the sharks rammed the boat with a force that almost caused it to capsize.

The clamdiggers fought back, pelting the sharks with clams and jabbing at them with clam rakes.

As they fought, they slowly rowed the boat towards the shore. It was only when they were almost to land that the attack broke off and the sharks disappeared into deeper water.

The sharks were reported to have been about 10 feet in length each.
Just a week later Captain Forman White would have an encounter with some sharks about a couple of hundred yards north.

White and his crew were experienced commercial fisherman.
They were in the process of hauling in menhaden at the mouth of the Shrewsbury River when they noticed several large sharks in their net.

As the net approached the boat the sharks went into a frenzy tearing the net to pieces. The crew fought off the sharks with axes until they had all escaped.

One shark bit the side of the vessel leaving a tooth imbedded in the side.
White, an experienced fisherman, estimated the length of the sharks at around ten feet each.

He Identified them as “man-eater” sharks. This would typically mean the Great White (Carcharodon carcharias). It was also sometimes used to name and large dangerous sharks such as a Bull Shark (Carcharhinus leucas) or Tiger Shark (Galeocerdo cuvier).

Later that week James Taylor, Frank Layton, James Parker, and Chas. Bradley were fishing in a small boat near Parkertown when they were attacked by a large shark.

The shark aggressively attacked the boat ramming and biting it repeatedly.
After a prolonged fight they managed to kill the shark and towed it to shore at Parkertown.

It was measured at 7-foot-long and had ½ inch thick skin that was very rough in texture.

The series of attacks is almost certainly the work of Bull Sharks (Carcharhinus leucas).

They are known for their aggressive behavior, large size, and propensity to enter fresh and brackish water.

Bull Sharks mate in late summer. Mating often takes place in fresh water, brackish water, or at the mouth of rivers. The highly aggressive and territorial behavior is likely linked to mating.
On investigation it is determined that Bull Sharks were mating in Sandy Hook Bay and the Upper Shrewsbury the summer of 1889. The aggressive Bull Sharks were responsible for all three attacks that summer.
Special Report of the New Jersey & New York Bight Shark Attack File

Robert J. Heyer is a Biologist and Marine Science Educator from New Jersey. He is a member of NMEA, NJMEA, NYSMEA, Association for Professional Observers, and a Fellow of the Linnean Society of London.